Located 18 miles inland from the Atlantic Ocean on the Savannah River, the Port of Savannah is the third largest seaport in the United States in terms of cargo volume. Owned and operated by the Georgia Ports Authority (GPA), the port embraces the Garden City Terminal, the Ocean Terminal, and the Savannah Terminal Railroad providing international logistics opportunities to a growing number of warehouses and distribution facilities for major retailers such as Target, Walmart, Home Depot, IKEA and Heineken. The port is the largest single container terminal in North America, built on responsive infrastructure for import and export business for the entire southeastern United States.

Guide to the Port of Savannah 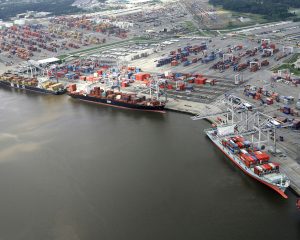 The port is one of the fastest-growing in the world, and anticipates rivalry with both the ports of Long Beach / Los Angeles and New York / New Jersey once the current expansion project (SHEP) is completed. With a current capacity of four million Twenty-foot Equivalent Units (a TEU is equivalent to approximately one twenty-foot long shipping container), the addition of a deeper river channel, new cranes, millions of square feet of warehouse and distribution center space, plus new railroad and highway infrastructure, the complex is aiming at a capacity of seven million TEU’s by the mid 2020’s.

There are two major terminals now under the auspices of the Georgia Ports Authority: the Garden State Terminal and the Ocean Terminal. Interstate highway connections provide access to major locations across the southeast and midwest in 24 to 48 hours. CSX and Norfolk Southern rail traffic connects the port terminals to freight facilities in Atlanta, Birmingham, Charlotte, Memphis and Orlando. On-terminal rail yards gives shippers the option to bypass roadway weight restrictions.

The Garden City Terminal spans 1200 acres and is the highest capacity shipping container yard in the nation. With more than 100 cranes and a rate of 40 ship-to-shore moves per crane per hour, the Port of Savannah is known for efficient movement of freight for export and import.

Ocean Terminal offers a breakbulk option for non-containerized shipments, as well as roll-on / roll-off and project cargo. The onshore facility next to ship berthing areas have almost 400,000 square feet of covered storage and 8 acres of paved open storage. 2,000 feet of rail frontage are served by CSX and Norfolk Southern.

The History of the Port of Savannah

From it’s beginning as a riverside commercial district, the Port of Savannah fueled the progress of an up-and-coming region. Eleven years after James Oglethorpe settled the area in 1733,  the first ocean-going ships docked at the wharves of Savannah. By the 1760’s more than a dozen warehouses lined the shoreline. Rice from local plantations made up most exports, traded for cargoes of English factory-manufactured goods and Mediterranean wines.

The value of the port grew steadily with exports valued by 1855 to $20.1 million. Nearly ninety percent of cargo value was cotton destined for English textile mills. Consortia consisting of the City of Savannah, state-chartered private companies, and state and federal funding sources kept the river dredged and navigable.

The U.S. Corps of Engineers administered the development of the Savannah River’s channels into usable waterways, battling sandbars, shipwrecks and logjams. Manufacturing facilities located their facilities farther upriver due to the unbuildable marshy soils near the mouth of the estuary, which explains today’s location of the port and it’s environs.

By 1876, imports and exports through the Port of Savannah reached $70 million with the addition of passenger shipping lines and four different railroads.

With the beginning of the twentieth century and our nation’s greater influence on the world stage, portions of the Savannah River up to King’s Island were regularly dredged to keep ever-deeper shipping channels clear. Cotton exports were largely displaced by manufactured commodities and shipments from the Savannah Sugar Refinery. World War II saw the manufacture and commissioning of 88 Liberty ships, sailing from Savannah to serve as troop and supply transports all over the world.

A three-person committee was formed in 1945 by the State of Georgia and christened the Georgia Ports Authority. A former US Army depot was purchased by the state for the site of the GPA’s first terminal, followed by a second site in 1950.

In 1965 the first containerized cargo ship entered the port, and the GPA became the first to operate a container crane in the South Atlantic region.

The redesigned Eugene Talmadge Bridge opened in 1991 with vertical clearance of 185 feet at high tide and a horizontal clearance of 1,023 feet. Container ships routinely called with 6,800 TEUs on board, and that number continues to grow. The Savannah Harbor Expansion Project (SHEP) dredging beginning in 2015, the port has proven its claim as one of the most forward-looking shipping hubs in the world. If all goes to plan, the Port of Savannah is expecting an annual capacity of 8 million-TEU’s by 2028.

As a responsible shipper, your dream is to gather all the components of your task into one simple one: get the job done in one stop. Port City Logistics may be just the partner you are looking for. Beginning with the short distance drayage of cargo from ship to warehouse, train, or truck or vice versa, we work hard to trim fuel and labor costs to get your freight on its way on time. The Port of Savannah’s twenty-seven ship-to-shore cranes annually conserve 1,857,000 gallons of diesel fuel by using electric power instead. Fuel-efficient and environmentally friendly jockey trucks expedite moving semi trailers around the yard or to a different location within a warehouse to match cargo with appropriate drayage.

Your cargo is secured from weather and other threats while keeping organized for easy access and accurate dispersal. Should your freight need a brief stay in a local warehouse, there are millions of square feet  within thirty miles of the port along the Savannah River Parkway Corridor, the I-95 Corridor, the 341 Alliance Corridor, and the I-16 Corridor. We analyze your needs and assign appropriate short- or long-term storage for your freight.

Like most industries post 9-11, the Port of Savannah has been challenged to upgrade it’s defenses against attack and theft. Before that date, security was focused mostly on narcotics and trademark infringement (counterfeit retail items). Now the U.S. Customs and Border Patrol office at the port battles terrorism and stowaways intent on doing harm in this country.

With growing federal help, the port has installed layers of security like high-tech fences, camera systems and handheld explosives detectors. They have also grown the number of federal agents from 60 to 90 along with a force of 60 port police officers on duty.

Also adding to the front lines of homeland security are strict rules involving the Transportation Worker Identification Credential or TWIC. Anyone with access to port facilities are required to display and use a badge for movement inside the perimeter of the property.

The Southeast Transportation Security Council (SETSC) has partnered with the Georgia Bureau of Investigation to tighten security in response to an increase in attempts to steal cargo associated with the port. Their goals include facilitating coordinated deterrents among state and federal agencies like the GPA and private logistics companies, along with the many intermodal and drayage companies that serve the port community.

Sharing current intelligence- what thefts are happening and how they are accomplished, evaluating where security needs tightening, and ongoing training in cargo security best practices are the three main objectives of the effort.

Combating all theft on behalf of shippers is a major priority for port stakeholders, especially in light of the the port’s imminent rapid expansion. Secure yards for temporary storage of containers is at the top of the list for preventing cargo-related crime.

When time comes to move your shipments, contact a freight broker to match your cargo to the speediest, most appropriate carrier available. For instance, your needs may include refrigeration, and we accommodate both trucks and trains in our scheduling for any and all perishables. If train service is the most efficient way to go, then the Port of Savannah holds justifiable pride in offering the fastest rail transit times in the south Atlantic region. The port contains direct access to on-terminal ramps with on-dock intermodal connections. Five states — Alabama, Florida, Georgia, North Carolina, and South Carolina — enjoy overnight service from the port. CSX Transportation and Norfolk Southern railroads interface with the port for the benefit of shippers in the Gulf, Southeast, and Midwest regions. A $6.5 million six-track rail yard expansion at the Mason Intermodal Container Transfer Facility serves both truck and rail transport more efficiently than ever.

Over The Road Truck Transportation

The Port of Savannah boasts immediate access to two major interstates. I-16 travels east to west and I-95 runs north to south, allowing a mere four-hour drive to the important markets of Atlanta, Charlotte and Orlando. No other region has a larger concentration of import distribution centers on the east coast than Savannah. As a gateway to the eastern U.S., Savannah offers a freight beltway by easy on-ramps to both I-16 and I-95 and your shipments are on their way as quickly as possible.

Economic Impact of the Port of  Savannah 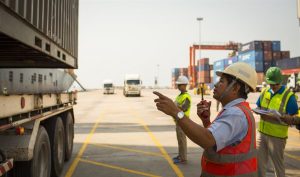 According to a study of 2017 fiscal year impacts, the University of Georgia’s Terry College of Business estimates that Georgia’s ports represent almost 440,000 full and part time jobs in the state. After a 19 percent increase since 2014, the ports have added over 70,000 positions and now account for 9 percent of Georgia’s total employment picture.

Supporting a number of industries such as transportation, manufacturing, retail sales and agriculture, port commerce accounted for about $106 billion moving through Georgia’s economy. Other impacts include federal, state and local taxes, which amounted to almost $9 billion.

The Port of Savannah continues to exceed expectations, with important impacts on local, state and regional economies. Manufacturers are increasing their presence by building new plants adjacent to the port, bringing jobs and vitality to the entire Lowcountry area. Make the Port of Savannah your gateway to the world whether you export or import, and let Port City Logistics tackle all your shipping details from drayage to warehousing to over-the-road truck transport.